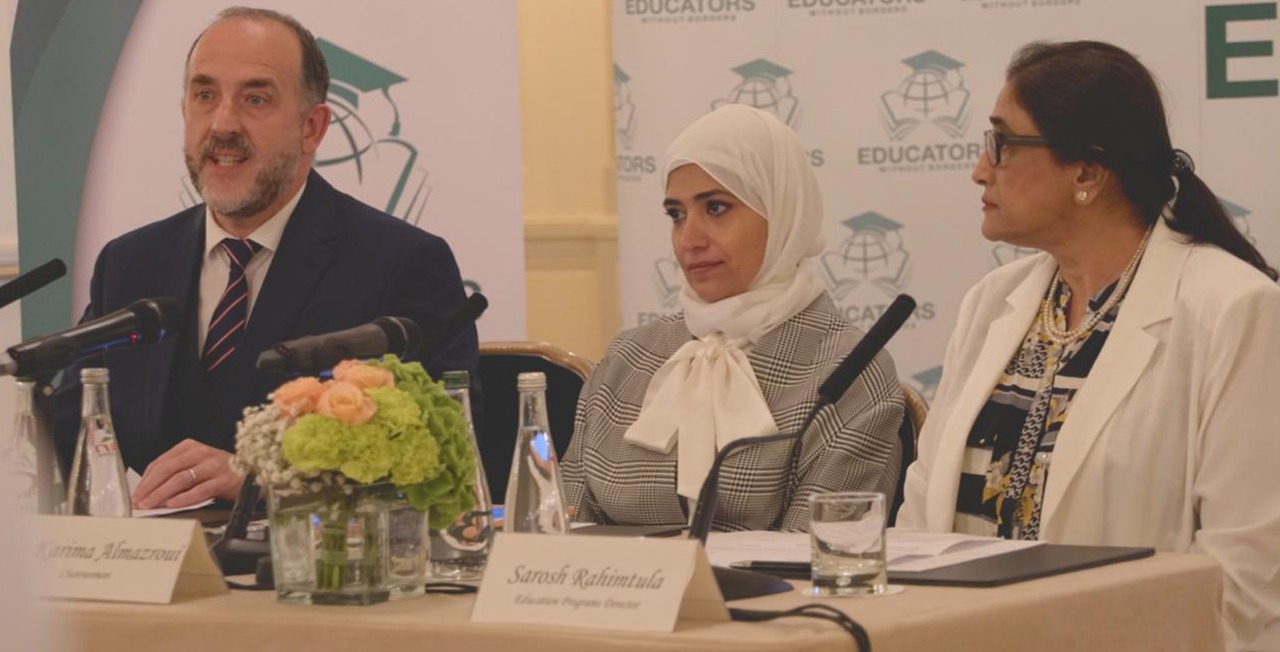 Prominent world figure concerned with humanitarian and charity work announced, on Thursday, July 11th 2019, the founding of an international non-governmental organization, called "Educators without Borders International" (EWBI) with its headquarters based in Geneva.

The announcement was made at a press conference held in Geneva, Switzerland, and attended by public figures, officials, people interested in humanitarian, charity, and social affairs, legal and academic figures, and representatives of civil society organizations.

The idea of establishing the organization originated from a sense of social responsibility towards those affected by the decline and lack of educational services caused by conflicts, strife, and wars, as well as areas that are not receiving sufficient attention by the governmental educational services, Dr. Karima Matar AlMazroui, Chairwoman of EWBI, said during the press conference.

Dr. Karima reviewed international reports and statistics, which indicate the high rate of illiteracy in the world and low access to education.

The organization has a global influence and seeks to establish a new concept of humanitarian and charity work, through which it guides the donation and efforts to areas aimed at improving the lives of millions around the world, she pointed out.

The president pointed out that education is one of the sectors that represent a critical juncture for the development empowerment of millions of children and youth, because of its impact on reducing poverty, stimulating economic growth, and helping to build a more secure and stable world.

She also pledged that Education without Borders International, since its inception this year, will work on promoting access to education for children and young people in developing countries, to become positive contributors to their communities by designing and supporting integrated, sustainable, and scalable programs.

The president revealed that the organization will organize the largest charity campaign under the theme "Partners in Education". The campaign aims to help people deprived of educational services and to lend a helping hand.

The organization also plans to launch a series of unique initiatives that will help governments, policymakers, and those who are interested in humanitarian and charity issues develop a future educational framework, according to Dr. Karima.

In this regard, Dr. Karima noted that the needs of children living in fragile communities, conflict zones, and natural disasters areas are a high priority on the organization's agenda. Statistics show that only about 2% of total humanitarian aid is spent on education.

Furthermore, Dr. Karima pointed out that the organization will play a major role in highlighting the need to focus more on the need of children in countries affected by the state of emergency. She added that one-third of the organization’s budget will be allocated to educational programs in emergencies.

One of EWBI’s programs is the launching of a "Humanitarian Action Award" in schools, with the aim of spreading the culture of charitable, humanitarian, and volunteer work in schools and enhancing it among students and teachers, thus contributing to the raising of a generation capable of taking responsibility and building development.

EWB represents the commitment of educators around the world to achieve the goals of sustainable development of the UN. EWB plays a key role in helping achieve the fourth goal of ensuring universal and proper schooling for all and promoting lifelong learning by 2030.

This is achieved by supporting early childhood development programs, access to proper basic and secondary education, girls' empowerment, as well as professional, vocational, and technical training, and teacher training, with special emphasis on education in emergencies and crises from natural or acquired disasters, and education for children with determination.

To achieve its noble goals, EWBI involves everyone in a series of volunteers and awareness-raising initiatives awareness globally, and fundraising activities in line with its commitments to achieve its educational goals.